If you want to play the piano,

you have to acquire an instrument

Here you will find important information and answers to questions you might have on buying or renting an instrument, your practice frequency and whether you be able to play Für Elise after one year of practice.

For proper musical development in both children and adults, an electric piano is not a good option.
Marcel Manshanden, piano teacher

Electric piano? Not for beginners!

An electric piano has a keyboard similar to a normal piano, but the sound is produced electronically through speakers rather than with hammers, strings and a wooden soundboard. This can be a disadvantage for beginners since it is difficult to produce certain musical sounds required in a piece of music with electric pianos. For example, you might be required to play softly with the left hand and loudly with the right hand, or vice-versa. This is difficult to achieve with an electric piano. 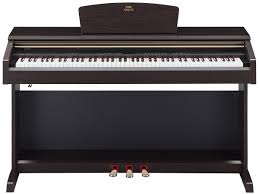 In order to play an electric piano you have to be an experienced pianist. I always compare it to making a beautifully coloured painting where, for example, you only have black, yellow and red at your disposal while the painting also requires that you be able to use blue and green. You often hear that electric pianos sound and play the same as an ordinary piano but this is only the case with very expensive electric pianos, and for the same you money you might as well buy a good new or used piano. That's why some piano teachers refuse to give lessons on to students with only an electric piano. For proper musical development in both children and adults, an electric piano is not a good option.

Upright pianos come in all sorts and sizes. You can buy an inexpensive new piano from € 2.000, while more expensive models are € 10.000 and more. Used instruments can often be found for around € 1.000. 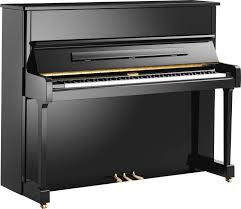 Pianos can be either bought or rented under a hire-purchase agreement. The advantage with some hire purchase agreements is that you can try the instrument for a year or more to see if it really is something for you, without committing yourself to the full purchase price. Some piano retailers offer very favourable hire purchase plans. The saying "you get what you pay for" also applies to pianos. Many low-priced pianos have an unattractive sound, are not easy play on and deteriorate after a few years, so you have to think about buying a new piano again. These pianos are often mass-produced in Asia and marketed using impressive-sounding German names, or are marketed under an extinct German brand name to which these 'piano makers' have bought the rights.

One alternative is to buy a second-hand piano. They are a great deal less expensive but it's good to know what exactly you are buying. It's very important to determine where the piano was manufactured and by whom, its age, and if the piano has been well-maintained or has undergone any renovation. Get advice from someone who knows about pianos and who can play the instrument to see if it sounds good and that its mechanism is functioning properly .

Pianos can vary greatly in sound. A tone can have warmth and nuance; it can also sound hard and cold . Personal preference also counts. A piano plays well when the touch is regular and doesn't require too much effort when pressing down on a key. You often find in old pianos that the mechanism has deteriorated so much that it's impossible to produce a decent sound. Only experienced pianists can coax something out of it; it's virtually impossible to learn how to play the piano on such an instrument. It's very important therefore to buy a piano that has good, solid mechanism that will continue to function for many years to come. The piano shouldn't be a hindrance in a pianist's development. 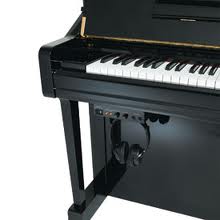 Many people in Amsterdam don't have the luxury of being able to make as much noise as they can and always have to take the neighbours into consideration. There's a good solution for this: the Silent piano. This is an ordinary piano with hammers, strings and a wooden soundboard but with a special, built-in electronic system. After depressing a foot pedal, the normal piano mechanism is disabled and a laser beam registers the movement of the keys and converts this into electronic sounds which you can hear through a pair of headphones. The Silent piano has both the advantages of an electric piano – namely being able to practise without anyone else hearing what you are playing– and an ordinary piano on which you can play normally once the Silent system is disabled. Of course, the Silent system is intended to be used only when it's really necessary - for example in the evening. Silent pianos can be purchased for approximately EUR 5,000 but it is also possible to install a Silent system in an existing piano for approximately EUR 2,000.

Noise pollution and the practise pedal

Some pianos have a damping pedal which, when activated, inserts a piece of felt between the strings and hammers producing a much quieter, nearly inaudible tone. However, it's advisable not to use this 'practise pedal' as you can't distinguish the difference between loud and soft when practising, and the music ultimately sounds 'flat' and emotionless. To minimise noise pollution it's best to place the piano against an inside wall and not against a wall you share with your neighbours. You can also stand the piano on a rubber mat; this is especially effective in reducing sound when you have a concrete floor.

How often should you practise and have lessons?

You have to be prepared to invest regular periods of time if you want to learn the piano. Ideally you should be able to play every day. For beginners, 20 minutes practise per day is usual, with a half-hour lesson per week. Advanced students need to practise more, and usually have a 1-hour lesson every two weeks.

Für Elise within a year?

In the beginning you will learn to play very simple piano pieces and how to read musical notation. Everyone starts with a teaching method that encompasses all aspects of music. Very soon, you will be playing different musical styles from all sorts of books. For example, classical melodies, swing music, famous pop songs, music with a modern touch or more traditional dance tunes. It's important that you play music which you yourself like, but also that you get to know and play new music. 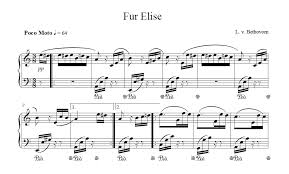 Many people don't realise that playing the piano can be quite difficult and doesn't just happen by itself. Well-known piano pieces such as Für Elise are actually quite tricky to play and require years of practise and lessons to be able to play properly. Only very talented children possess the ability to play a piece like Für Elise within a year.

How should a piece be performed?

Performing a piece for other people is also part of making music. Most piano teachers organise afternoons where their pupils get to hear pieces of music. You can also play together with other people, for example two people seated at the same piano (known as quatre-mains), or with someone playing another instrument.